Rands in the Talent Exchange 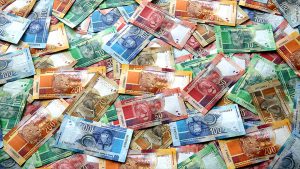 Every now and then we are compelled to write something about the increasing use of Rands in the Talent Exchange, in order to reset things and prevent the takeover of the Exchange by this plague!

The object of the Talent Exchange is to create a ‘noconomy’, an alternative ‘economy’ that does not run on money, that no one controls (and which doesn’t control us!) and is not premised on growth. An economy without money sounds like a contradiction in terms or a reversion to a time before money, when people gifted each other or bartered what surpluses they had for what they required.

The Talent Exchange ‘noconomy’ is not an attempt to take us back to some mythical world before we all became slaves to the capitalist money-economy. It is, however, an attempt to help us liberate ourselves from the ‘money-prison’ that we all find ourselves trapped in. Hanging onto Rands in the Talent Exchange indicates that we are not yet ready for the freedom of participating in our own economy – an economy free of parasites wishing to extract a portion of our produce. The ‘noconomy’ helps us to exchange what we have for what we need without every action being recorded. The Rand economy attempts to monetize all life into this thing called ‘the economy’ so that our output can be maximised to generate the surplus off which the parasites live.

At our Talent markets there is once again a creeping tendency for traders to sell for part-Talents, part-Rands. The more who do this the more others are influenced to do the same. This has the effect of undermining our markets and reducing trade, as many members are put off by the Rands and refuse to buy at all if money is involved. Many sellers who have spent Rands to produce their products feel justified in charging part-Rands in order to recoup the money they have outlaid. But charging Rands means they earn fewer Talents, which they could use to purchase things that would otherwise cost Rands. Not only do they earn fewer Talents but they do less trade all round and leave Talent Exchange ‘shoppers’ wondering why they bother coming to our markets. If Talent Exchangers wanted to spend Rands they would rather go to the nearest shopping mall where the choices are greater.

The same tendency is seen on the website, where many offerings are advertised as ‘mixed’ (part-Rands, part-Talents). Many Talent Exchangers simply ignore these but the presence of such offerings on the site has the same effect as do ‘mixed’ items at markets. They indicate that those who advertise this way fear they will not get rewarded for what they offer and display a lack of faith in others.